The human papillomavirus (HPV) is the most common viral infection of the genital tract.

HPV is a group of viruses that are extremely common worldwide. There are more than 190 types of the virus, of which at least 13 are cancer-causing (they are known as high risk types). The human papillomavirus is transmitted primarily by sexual contact, and most people become infected they soon after become sexually active. Two HPV types (16 and 18) cause 70% of cervical cancer cases (CC) and premalignant pathological conditions of the cervix.

The probability to be ill 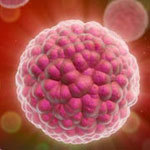 The human papillomavirus is transmitted primarily by sexual contact, and most people become infected they soon after become sexually active. But for the transmission of the virus penetrative sex is not required. The bodily genital contact is a well-established by transmission of human papillomavirus infection. Risk groups of HPV infection are children and adolescents 15-18 years.

Cervical cancer is caused by sexually acquired infection with certain types of HPV. Risk factors of cervical cancer: first sexual intercourse at an early age; multiple sexual partners; immune suppression (e.g. HIV-infected individuals are at higher risk of HPV infection and are infected by a broader range of HPV types).

The symptoms and character of the disease

Most HPV infections do not cause symptoms or disease and resolve spontaneously (approximately 90% clear within 2 years). However, persistent infection with certain types of HPV (most frequently types 16 and 18) can cause precancerous lesions. Without treatment, these lesions may progress to cervical cancer. To date, cervical cancer is the most common disease associated with human papillomavirus. Cervical cancer is the fourth among the most common types of cancer in women and the seventh overall: estimated 528 000 new cases in the world in 2012.

The symptoms of cervical cancer tend to appear only at an advanced stage of the cancer and may include the following:

In the later stages, you may see more severe symptoms.

HPV-6 and HPV-11 can also cause a rare condition known as recurrent respiratory papillomatosis (RRP), where warts are formed in the larynx or other parts of the respiratory tract. RRP occurs mostly in children under the age of 5 years (juvenile RRP) or persons in the third decade of life (adult PRP). In rare cases, women with genital HPV infection can transmit the virus to the baby during childbirth. Untreated RPE can lead to serious problem because of the obstruction of the airway.

Complications after the disease

It is established that cervical cancer in 100% of cases caused by oncogenic types of human papillomavirus (HPV). In women with normal immune system cervical cancer for 15-20 years. Women with a weakened immune system, for example, with HIV infection in the absence of treatment, its development may require only 5-10 years. Despite limited data on anogenital cancers than from cervical cancer, an increasing number of evidence about the relationship of human papillomavirus with cancer of the anus, vulva, vagina and penis. Although these cancers are less common than cervical cancer, their Association with HPV make them potentially capable of prevention through the use of the same strategies for primary prevention as cervical cancer.

The types of HPV that do not cause cancer (especially types 6 and 11) can cause genital warts and respiratory papillomatosis (a disease in which tumors grow in the airway leading from the nose and mouth into the lungs). Although these conditions very rarely result in death, they can often cause disease. Genital warts are very common and highly infectious.

Screening for cervical cancer is testing for precancerous lesions and cancer among women who have no symptoms and feel perfectly healthy. When screening detects pre-cancerous lesions, these can easily be treated and thus prevent the development of cancer. Screening can also detect cancer at an early stage with a high probability of cure.

Given the fact that precancerous conditions develop over many years, each woman aged 30-49 years are recommended to undergo screening at least once in your life, but better – more. Screening effective in reducing mortality from cervical cancer just in case of participation of a significant number of women.

In developed countries, there are programmes that provide women the opportunity to undergo screening that can identify most precancerous lesions at stages when they can easily be treated. Early treatment of human papillomavirus to prevent up to 80% of cases of cervical cancer in these countries.

In developing countries, limited access to effective screening means that the disease is often only detected at late stages when symptoms develop. In addition, the treatment of the disease in these late stages is ineffective, resulting in high levels of mortality from cervical cancer in these countries.

The effectiveness of vaccination

The results of clinical trials indicate that the existing two vaccines are safe and very effective in preventing infection with HPV 16 and 18. Both vaccines work best if administered before exposure to the virus the human papilloma virus. Therefore, it is preferable to administer them before first sexual contact. Vaccines do not treat HPV infection or HPV-associated disease (such as cancer).

Some countries have introduced vaccination of boys against human papilloma virus considering the fact that it prevents genital cancers in both men and women, and one of the available vaccines also prevents the development of genital warts in men and women. In addition, vaccination of boys is used to prevent the circulation of HPV in the population of adolescents and young adults. The who recommends vaccination of girls aged 9-13 years, as this is the most effective, from the point of view of cost, public health measure against cervical cancer.

HPV vaccination does not replace screening for cervical cancer. In countries where HPV vaccine is introduced, it may also be necessary to develop screening programmes. By the end of 2013, the vaccine against human papillomavirus was introduced in 55 countries who.

Modern mathematical models show that while enrolment of girls 12-13 years with a full course of primary immunization (3 doses) vaccine against papillomavirus infection, can be used for reducing the risk of developing cervical cancer by 63%, cervical intraepithelial neoplasia of the third degree (precancer) – 51%, cytological disturbances in age cohorts up to 30 years – by 27%.

There are currently two vaccines that protect against 16 and 18 types of human papillomavirus that cause at least 70% of cancers of the cervix. These vaccines also provide some cross-protection against other less common HPV types which cause cervical cancer. One of the vaccines also protects against HPV types 6 and 11 which cause anogenital warts.

Development and registration of vaccines against human papillomavirus infection determined the possibility of primary prevention of cervical cancer.

Cervical cancer is the second most common cancer among women, with estimates annually 530 000 new cases of the disease, about 270 000 patients die.

The risk of cervical cancer to every woman in an average lifetime is 0.53%.